Far from precision-guided munitions, sanctions are weapons of starvation, which target the most vulnerable civilians for slow and painful death by deprivation of food and medicine 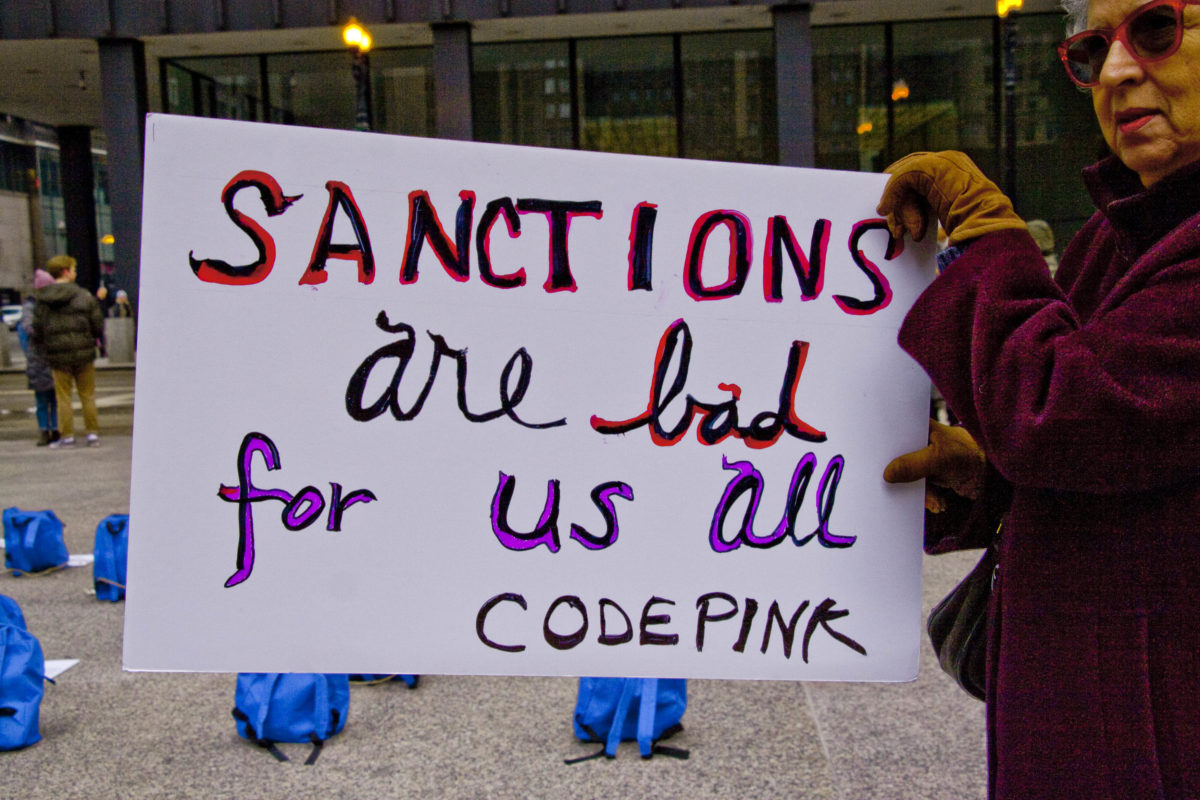 After withdrawing from the nuclear deal with Iran last year and resuming sanctions last November, the White House in April announced that its goal was to “drive Iranian exports to zero.” To make this drive happen, the White House stopped allowing (my emphasis) countries like India, China, Japan, Turkey, and South Korea to import Iranian oil: dictating to sovereign countries whom they can trade with.

The dictating doesn’t stop there. Last December the United States had Canadian authorities detain and imprison a Chinese executive, the chief financial officer of telecom company Huawei. Meng Wanzhou is currently on trial in Canada, on the allegation that her company violated U.S. sanctions against Iran. Not content with having told China that it cannot trade with Iran, the United States has gotten a third country, Canada, to take a Chinese corporate executive captive in what Trump suggested was leverage for a trade deal: “If I think it’s good for what will be certainly the largest trade deal ever made, which is a very important thing—what’s good for national security—I would certainly intervene, if I thought it was necessary,” he told Reuters in December.

The trade deal with China didn’t come through, and a “trade war” has begun. Meng Wanzhou is still stuck in Canada. And the blockade against Iran is still tightening. Economist Mark Weisbrot assessed some of the damage to the Iranian economy in a recent segment on the Real News Network, noting that when sanctions were imposed in 2012, oil production dropped by 832,000 barrels per day and GDP by 7.7 percent; when they were lifted in 2016 in the nuclear deal, production increased by 972,000 barrels per day and GDP increased by 12 percent that year. In 2018 when sanctions were imposed, oil production fell dramatically again and inflation rose by 51 percent; shortages of dozens of essential medicines, according to a study at the University of California, have followed.

Some basic economics are in order here. A country that does not need to import or export is called an autarky, and in today’s global economy there are no autarkies. All national economies depend on trade: they export, earn foreign currency, and use that to import what they cannot produce. Driving a country’s exports to zero means destroying the country’s economy, and depriving the country’s people of necessities.

Sometimes billed as an alternative to war, sanctions are in fact a weapon of war. Far from precision-guided munitions, sanctions are weapons of starvation, which target the most vulnerable civilians for slow and painful death by deprivation of food and medicine. They are an alternative to war in the sense that unlike the invasion of ground troops or even the dropping of bombs, they pose little risk to the aggressor. This is their appeal to someone like Trump, who revealed the genocidal intent behind the Iran sanctions when he threatened (on Twitter) “the official end of Iran.”

In the 1990s, one focus of the antiwar movement was the impact of the genocidal sanctions against Iraq, which killed 500,000 children (a “price” that Madeleine Albright famously said was “worth it”). Antiwar activists feared that the sanctions were part of a military strategy that would end in even more devastating shooting war. Those fears proved true. Today’s sanctions seem to draw from the same playbook.

International law recognizes that sanctions are a form of warfare, and places the use of the sanctions weapon in the hands of the United Nations Security Council. And so it happened that between the 1990 and 2003 U.S. wars on Iraq, the UN played the shameful role of administering the Iraq sanctions. But today’s unilateral sanctions imposed by the U.S. circumvent any UN legalities. In the same Real News segment, UN Special Rapporteur on Unilateral Coercive Measures Idriss Jazairy noted that about one-quarter of the world’s population is under some form of unilateral sanctions. Iran, Venezuela, Syria, Cuba, Sudan and others are under various U.S. sanctions regimes. Yemen is fully blockaded by the U.S., UK, and Saudi Arabia; Gaza and the West Bank are completely sealed in by Israel; Qatar is blockaded by Saudi Arabia and the UAE, and the list goes on.

U.S. sanctions against Venezuela have already killed 40,000 people between 2017 and 2018, according to a report by Mark Weisbrot and Columbia University’s Jeffrey Sachs. The more intense sanctions imposed in 2019 will kill still more. Venezuela’s electrical grid is damaged, most likely because of sabotage. Maintenance of potable water pumps has become impossible without imported spare parts, leaving millions without water. A Venezuelan professor of economics, Pasqualina Curcio, told a delegation of the End Venezuela Sanctions coalition that sanctions have cost the country $114 billion, “which is nearly equal to one year’s worth of Venezuelan GDP at a typical oil price, or 26 years’ worth of medical imports.”

One of the tactical arguments anti-sanctions campaigners sometimes make is that sanctions “don’t work.” And for their declared purpose of “regime change,” indeed they do not. But when a policy is so widespread, such a first resort, perhaps the declared purpose is not the real purpose. If the purpose is to destroy economies, isolate countries, coerce allies, keep tensions near boiling and maintain a constant threat of war, sanctions are successful. It has been shown time and again that torture “doesn’t work” for obtaining information. But torture is not a technique for obtaining information. It is a technique for breaking a person and, when practiced on a mass scale by an apartheid state or dictatorship, for breaking a society. Sanctions are similar: the point is to break the society, not “regime change.”

Sanctions are Trump’s favorite weapon, but good Democrats are no different. Obama oversaw the destruction of Syria, Clinton laughed about the murder of Gaddafi and the destruction of Libya, and Albright said that 500,000 Iraqi children’s deaths were “worth it.” For the empire, genocide, like aggression, is a normal part of politics. Nuclear planners plan how to commit it. Sanctions officials administer it. And for the most part, human rights organizations take no position on it.

It is possible that at some point sanctions could become self-limiting. If enough countries are sanctioned, they might of course decide to trade with one another. In attempting to isolate so many big countries, the United States could isolate itself, creating a kind of “coalition of the sanctioned.” But from the U.S. perspective, with Brazil, India, and Egypt (the biggest countries in Latin America, South Asia, and the Arab world) all utterly subservient, perhaps this looks like a good moment to try to pressure China, Russia, Iran, Venezuela and Cuba. Trump’s planners can rest assured that it is not them, but millions of innocents in those countries who will pay for their power plays.