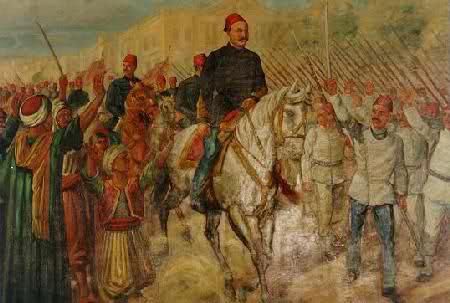 In 1882 at the battle of Tel el Kabir, Garnet Wolesley (who had suppressed the Riel Resistance in 1870) defeated the Egyptian nationalists led by al-Arabi. This was the final blow in a long imperialist campaign to take Egypt from the ambitious modernizers that had ruled it from the 1820s. The epic financial swindle involved are far too little known, but luckily they were chronicled in amazing detail by Theodore Rothstein, in a 1910 book called Egypt’s Ruin, with an introduction by Wilfred Scawen Blunt. Rothstein and Blunt are interesting characters themselves, but the story they tell has many resonances and should be carefully attended to by anyone who’s ever wondered what the IMF, World Bank, and US military are up to today… our 4th instalment in the Scramble for Africa series.