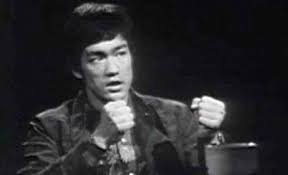 Tarantino’s mastery seems to be in reading the mood and making a movie for it. His latest movie is perfect for the Trump era, based as it is in nostalgia for a racially homogeneous Hollywood.

The genre for Once Upon a Time… forces some choices on both the storyteller and the audience. The movie treats the day that actor Sharon Tate was murdered by followers of Charles Manson, but it reverses that murder and ends with Sharon and friends having a nice drink in her house after the would-be murderers have been eaten by a dog, bashed in on various surfaces of a house, and incinerated by flamethrowers. But the whole hook of the movie is its ability to evoke the Hollywood of 1969, which Tarantino clearly wants us to think was a good time. So, which parts of it were real and which were changed? These were the decisions Tarantino made, the consequences of which moviegoers have to suffer.

Here’s one decision I was wondering about. Since all the protagonists were white, did they not use casual racial slurs in their conversations with one another back then? They certainly are vitriolic towards the “f#@in hippies”. But I didn’t hear them use the n-word even once. No anti-Semitism among these paragons either. At Manson’s ranch, one of the villains, “Squeaky”, or “the red-head” tells Brad Pitt’s character that she “doesn’t want to be gypped” of her time watching TV with George, the ranch’s mostly incapacitated owner. “Gypped” is a racist term that implies that gypsies, or Roma, are thieves. Like the Jews, the Roma were targeted for extermination in the Nazi Holocaust, and indeed, the term “gypped” is used interchangeably with “jewed” by racists. Tarantino inserted the word “gypped”, presumably to add some verisimilitude about the casual racism with which people talked back then. So why no casual anti-Black racism or anti-Semitism, which was also the coin of the realm at the time? Tarantino used to do that, with anti-Black racism at least: Reservoir Dogs is full of n-bombs dropped by the white cast, in all kinds of shameful ways, with deniability for the storyteller to say, hey, I’m not racist, my characters are.

Aside from the protagonists’ hatred of the “f#@in hippies”, the film is all about not showing you anything of the 1960s social movements against the Vietnam War, the effects of the Civil Rights movement, the Black Panthers — or even the East L.A. Walkouts of 1968 or the Watts riots of 1965. The only mention of that context is when one of the Manson-following villains (played by Margaret Qualley), trying to seduce Pitt’s character (a Vietnam veteran), says that “real people are dying in Vietnam”. One of the would-be killers, who gets incinerated by Leonardo Di Caprio, delivers a critique of media violence before her attempted murder and elaborate death. 1969 Hollywood was a better, cleaner place, Tarantino is saying, with the only encroachments on this purity coming via a death cult of “f#@in hippies” (not via any real Black people or people with genuinely held anti-racist values).

On the theme of purity, Tarantino’s camera worships Margot Robbie’s angelic character, Sharon Tate, lingering on her golden hair, her pristine white boots and her beautiful smile as she dances and enjoys the audience reaction to her acting (a significant amount of the movie’s runtime is of Sharon Tate watching her own movie — which means a significant amount of the audience’s time is actually spent watching someone watch a movie). The camera follows Robbie (and Qualley in a different way, since she’s a bad) the way you’d see in a Michael Bay movie or a James Bond film, with Robbie as the good Bond girl and Qualley as the bad one.

And on Bond films: if Once Upon a Time… were a Bond film, the superspy role would go to Brad Pitt’s character, Vietnam veteran and possible wife-murderer Cliff Booth. And the main way we know of Cliff’s superpowers is by way of an encounter with Bruce Lee — for me, the most insulting part of this insulting film.

Bruce Lee is portrayed as a fan of Muhammad Ali, which of course he was. Bruce’s philosophy was to learn about fighting from every possible source. At that time, Muhammad Ali was displaying attributes and skills to astound anyone, but even more so a student of martial arts like Bruce. A story known by every Bruce Lee fan:

Another time Yeung, aka [Bolo] went to see Bruce at Golden Harvest Studios. Bruce was screening a Cassius Clay [Muhammad Ali] documentary. Ali was world heavyweight champion at the time and Bruce saw him as the greatest fighter of them all. The documentary showed Ali in several of his fights. Bruce set up a wide full-length mirror to reflect Ali’s image from the screen. Bruce was looking into the mirror, moving along with Ali.

Bruce’s right hand followed Ali’s right hand, Ali’s left foot followed Bruce’s left foot. Bruce was fighting in Ali’s shoes. “Everybody says I must fight Ali some day.” Bruce said, “I’m studying every move he makes. I’m getting to know how he thinks and moves.” Bruce knew he could never win a fight against Ali. “Look at my hand,” he said. “That’s a little Chinese hand. He’d kill me.”

Bruce was a keen teacher, and a great showman (see the videos of his martial arts demonstrations), but he was no braggart and he spent all his time picking apart and analyzing fighting methods, practicing them, and teaching them to others. So, of course, Tarantino portrays him exactly as a loudmouth braggart and a bully, who picks a fight with Brad Pitt’s strong, silent character on a set. The fight starts when this cartoon Bruce (in direct defiance of what the real Bruce believed and said) tells someone that he would turn Muhammad Ali “into a cripple” if they fought — this, Brad Pitt’s character cannot abide. So Bruce — who in real life reluctantly accepted challenges on-set from blowhards (ie., who was much more like Pitt’s character was portrayed) — fights Cliff, who gives the foreign braggart a good old-fashioned American beating.

In the real world, Bruce Lee faced a glass ceiling in the racist Hollywood of the time, despite his extraordinary gifts. Playing Kato in the Green Hornet, the story goes that Bruce refused the plan in a crossover episode to have his character defeated by Batman’s sidekick, Robin. No one would have believed it. Screenwriters changed the fight to a draw.

So, how would Brad Pitt’s character, a stuntman and Vietnam veteran, have approached a fight with Bruce? Presumably he would have been trained in the Army Combatives system at the time — a system Bruce knew and studied. Maybe Cliff also even knew American boxing and wrestling — which would have been no surprise to Bruce, who taught American students with these backgrounds. So, would Bruce have opened with a lot of fancy movement and kiai sounds and a flying sidekick, like he does in the movie? Would he have done that same kick after challenged by Cliff to do it again? What we know of how Bruce behaved in sparring situations says no (look at this YouTube MMA analyst’s breakdown of a sparring session). Nor would Bruce have reacted to Cliff’s attacks with stunned surprise: he was an experienced fighter who would have seen it all before.

It gets worse. Because in the fight choreography Tarantino chose for the scene, Pitt’s character actually uses wing-chun style close-quarters hand-fighting for a portion of the fight (this was the first style Bruce studied before developing his own). Pitt’s stance and movement incorporate moves that were introduced to North America by (the real) Bruce Lee, who did a lot to change and improve both real martial arts training and fight choreography. While disparaging the real Bruce, Tarantino freely uses his martial arts to make his movie look cool.

In the end, Bruce is just a stepping stone, a foreigner whose fancy moves are no match for the all-American hero, a foil to show the invincibility of the white protagonist. The very role the real Bruce chafed against his entire career.

There’s more to say about the class dynamics of the movie, the way in which Pitt’s working class character knows his place and is uncritically loyal and ever-grateful to Di Caprio’s upper class character. But I’ll leave that for someone else. I’ll just say that while this movie rewrites a gruesome murder and spares the actual victims, it is also an attempted murder on, among other historical realities, the real Bruce Lee.