END_OF_DOCUMENT_TOKEN_TO_BE_REPLACED

10/7 will not go down in history or live in infamy the way 9/11 did. Those who wish that it would are guilty of something called moral equivalence.

END_OF_DOCUMENT_TOKEN_TO_BE_REPLACED

Colombian community leaders Alirio Arroyave and Arquimedes Vitonas were in Toronto last month to give talks, part of the Canada-Colombia Solidarity Campaign. rabble interviewer Justin Podur caught up with both men during their stay and spoke with them about participatory politics, direct democracy and what can happen when the people making the decisions are also the people affected by them.

END_OF_DOCUMENT_TOKEN_TO_BE_REPLACED

Two years ago, just after Vicente Fox’s election ended the PRI’s 71-year long dictatorship over Mexico and just before Pablo Salazar’s election as governor of Chiapas raised such high hopes of change, there was a literacy class in the Tzotzil, Abeja refugee community of X’oyep in the Altos.

The teachers, young urban university students from northern Mexico had given their students the assignment of writing a single page composition, on any topic they chose.

END_OF_DOCUMENT_TOKEN_TO_BE_REPLACED

What happened in Jenin? What is happening in Jenin? The second question is more important than the first, but the two are related. With the United Nations report on Jenin published and the Human Rights Watch Report tabled some time ago, the official voices have spoken.

END_OF_DOCUMENT_TOKEN_TO_BE_REPLACED

Alvaro Uribe Velez was being sworn in as Colombia’s president on August 7 while mortar shells were hitting the presidential palace. He was swearing that his war plan, that includes the creation of a ‘civilian intelligence network’ of spies who are to inform on their neighbours, would make Colombians safe.

END_OF_DOCUMENT_TOKEN_TO_BE_REPLACED

In June-July 2002, I visited the West Bank and Gaza under the auspices of the International Solidarity Movement (ISM– www.palsolidarity.org). By then, the massive invasions, called “Operation Defensive Shield”, that killed nearly 500 people (479 in March and April 2002, according to the Palestinian Red Crescent Society) were over. What I witnessed was the extension of that policy: daily incursions in Jenin, checkpoints everywhere, and a slow-motion attempt at ethnic cleansing. There was also resistance of many forms– constant attempts to simply continue with life in spite of the many humiliations and indiginities; and resistance from unexpected quarters, like that of the refuseniks.

I am not a skilled photographer, nor did I have any equipment worth talking about. I tried to take photos of things that surprised me. I hope that the photos reveal something you might not have seen before as well. There are 14 pages of photos, and some of them are big, so viewing this may take a little while…

The Refuseniks are Israeli soldiers who refuse to serve in the Occupied Territories. They believe that Israel’s security is best served by restricting itself to the 1948 borders. They see themselves as ‘the true guardians of Israel’; they believe that ‘Israel has no right to do what it is doing in the West Bank and Gaza’; and their choice of tactics is designed to ‘try to move the whole debate to the left’.

Here they are in Jerusalem, protesting outside a trial of one of their number.

The fate of cars in the West Bank

Anyone have any parking tickets? At Qalandya checkpoint near Ramallah, the penalty for illegal parking (of Palestinian cars) is having your tires slit. How can one tell a Palestinian car from an Israeli car? The license plates, of course! Israeli plates are orange; Palestinian plates are green. One common sight at checkpoints is a long queue of green-license plated cars– and then an orange-plated car zips straight on through without even being checked. These photos are of a pair of cars I saw in different parts of Ramallah; remnants of the April invasions, and encounters with tanks. 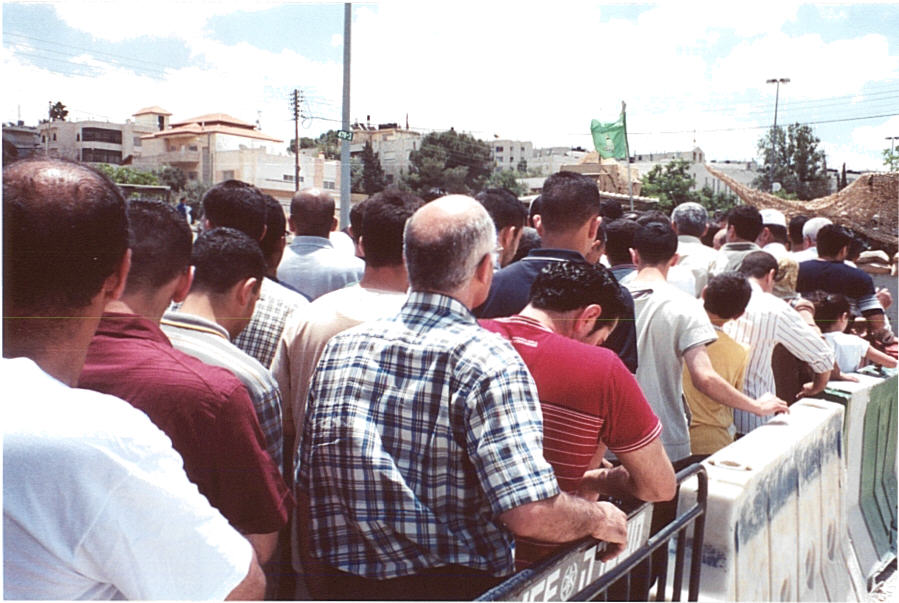 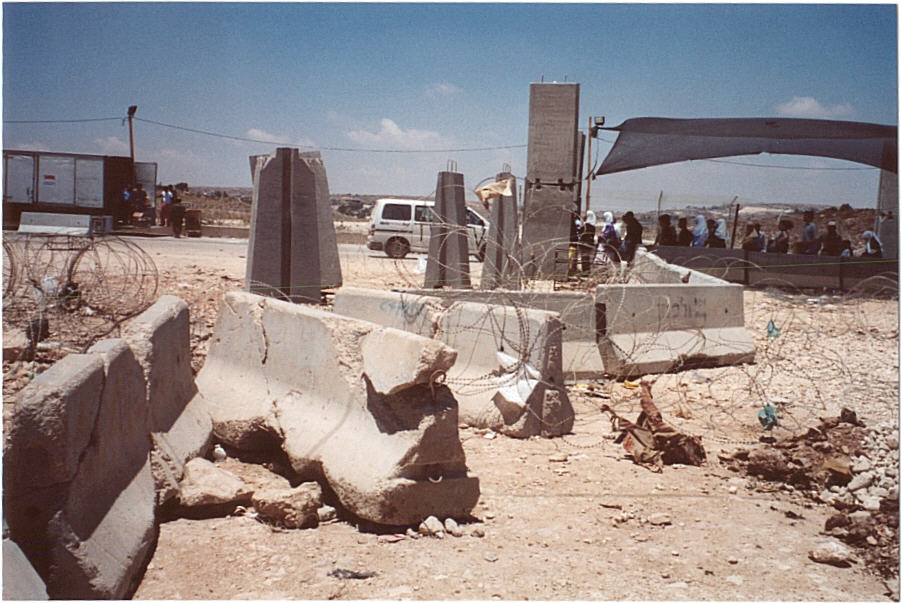 After you pass Qalandya checkpoint, you can get into a taxi and take a ride up the road. There, you might find another impromptu checkpoint, as we did. You can stand in line again and have your bags searched and your ID checked, just in case you managed to get anything through the checkpoint that you would have had to go through about a 1/2 km ago, in order to get here.

Some cheap alternatives to checkpoints

Checkpoints are often permanent structures with concrete bunkers, barbed wire, and several soldiers staffing them. In order to restrict the mobility of Palestinians more cheaply, Israel has developed a number of methods that are less permanent and costly than the classic checkpoint.

One such alternative is simply parking a tank on the road, or just off the road, as this one in Gaza. Can you spot the tank? They’re sometimes difficult to see. Look near the tower in the centre of the picture. This method is effective because there are only two roads between Gaza City and the cities to the south of it. The central road has a checkpoint that is almost always closed. Gazans therefore take the road close to the beach, where this photo was taken. The ‘impromptu checkpoint’ strategy is therefore a way to shut northern Gaza down completely and cut people off from the south.

What do you do when you need to get somewhere and all the roads are closed? You walk, along the beach, in this case.

This has happened before– when both roads are closed, and Palestinians walk along the beach, the IDF has patrolled the beach with boats, shooting at the travelers.

When the main roads are blocked, one can try the side roads. In order to block the side roads, Israel just piles dirt on them. It may only be a temporary expedient, but it does the job.

One of the International Solidarity Movement (ISM)’s latest campaigns is one in which internationals protect Palestinian families when they go out to pick their olive trees. With snipers around, picking olives can be a dangerous thing.

The very first thing I saw upon my entry into Gaza was a pair of armoured bulldozers knocking over a grove of orange trees in the village of Bet Hanoun, very close to Erez checkpoint and Erez settlement. We pulled out our cameras– and were immediately warned verbally not to take photos. We walked a little up the road and tried to take some photos again– and the tanks accompanying the bulldozers fired warning shots in the air. I failed to get a photo of the bulldozers– not on account of the warning shots, but on account of a failed battery. But I did get some photos of the orange grove after bulldozing, when locals were trying to salvage firewood from what used to be 50 year old, productive fruit trees.

The bulldozed orange grove in Gaza

We arrived in Jenin during curfew. Curfew is announced on television the night before, and the times can vary, although Jenin is under curfew virtually every day and has been for months. There is quite a lot of defiance of curfew, but defiance carries a terrible price, as the next photos will show.

When we arrived, no one in this vicinity was defying curfew…

During curfew, tanks drive around, shooting at people, knocking over electrical wires, and making announcements over megaphones.

The marketplace in Jenin

When curfew is lifted, people take advantage– kids come out to play, adults sit outside and spend some time. People also try to compress all the errands they have to run– the shopping, the visiting– into those few precious hours when curfew is lifted.

Here are a couple of pictures of ‘terrorists’ I encountered in Jenin.

The zone of total destruction in Jenin

In the April invasion, hundreds of buildings were knocked over. Most reports say 52 Palestinians and 23 Israeli soldiers were killed in what Israel calls a combat, and what many call a massacre. It was both. There was certainly fighting, and the fighting was highly imbalanced (all the tanks, helicopters, bulldozers, and artillery was on one side). Nobody knows exactly how many died in Jenin because the IDF still hasn’t released all the information on the people they have detained. Here are a few photos of the part of Jenin camp that was totally destroyed. 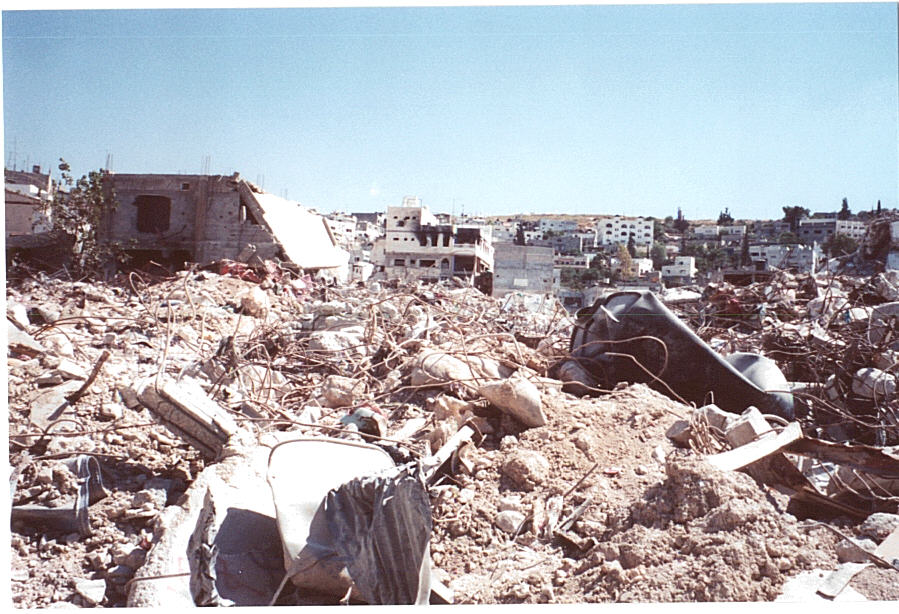 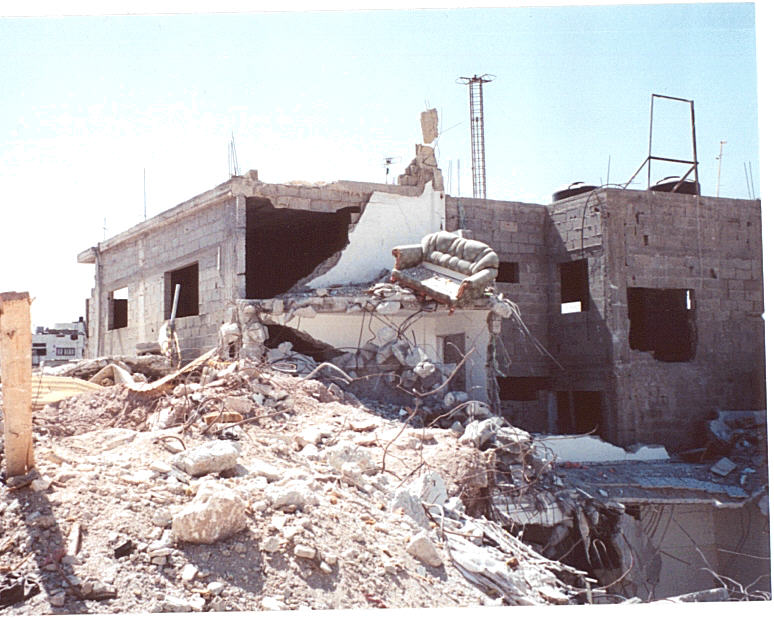 Operation blow up the bank

One day during curfew the IDF appeared in force at an intersection and we heard there were many kids out in a spontaneous demonstration against the tank and soldiers who were present there. We made ourselves conspicuous in the crowd so the IDF would know that internationals were present. We didn’t know what their intentions were until their mission was already complete. After perhaps an hour of the tank driving back and forth, the soldiers and the tank firing in the air after pointing their weapons at the crowd, with the crowd advancing and retreating, the soldiers piled into the tank and drove away. There was an explosion, and when we turned the corner a bank had been blown up.

Here’s the view from the crowd. 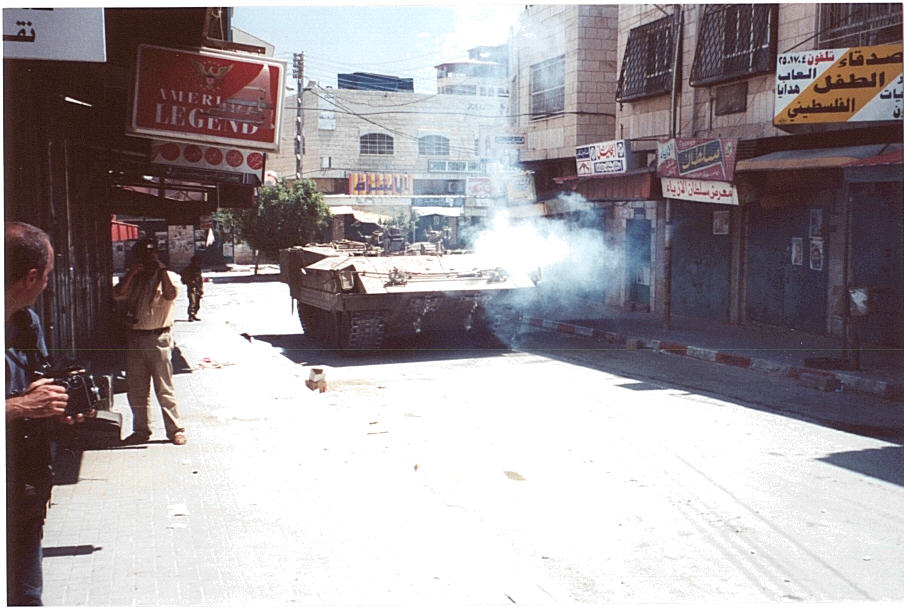 And here’s what the soldiers must have seen. 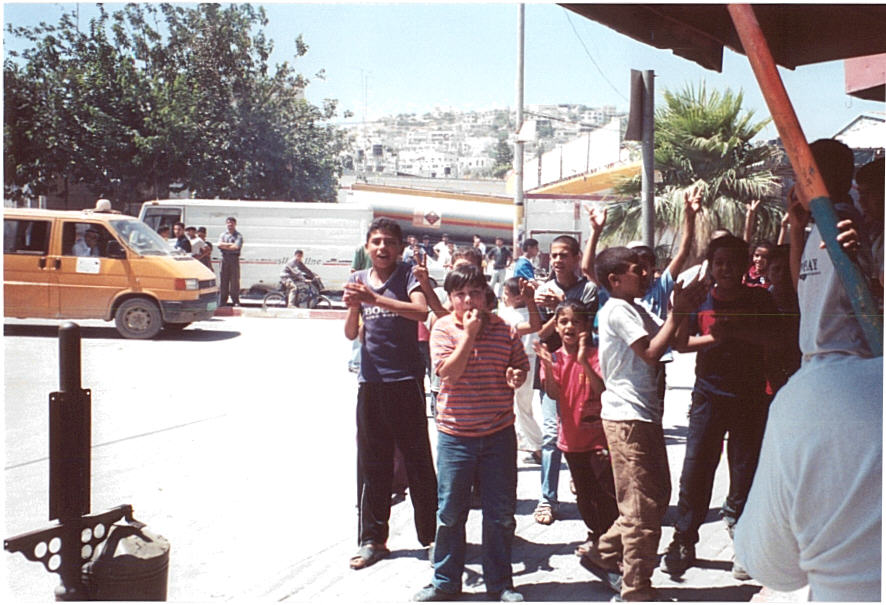 Here’s the view when we turned the corner… 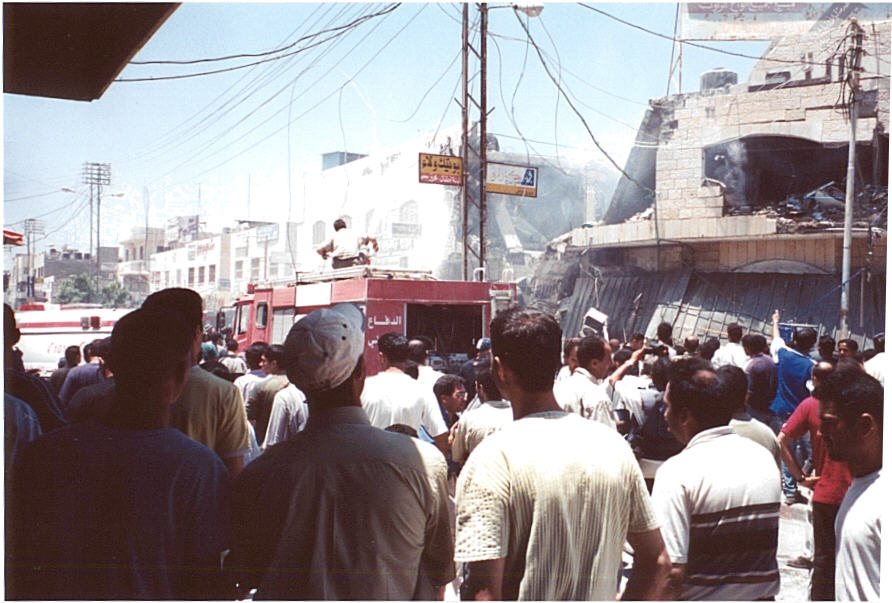 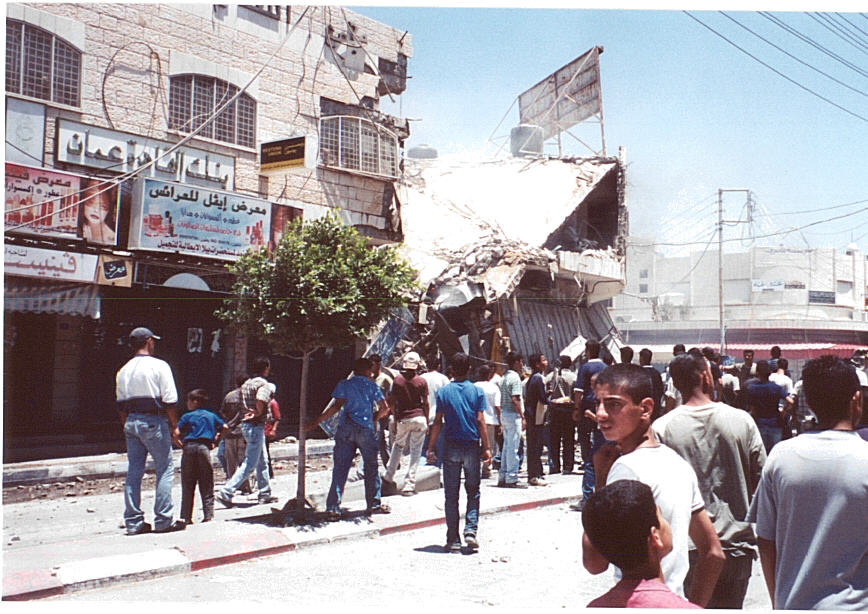 We will stay here

The United Nations set up a tent city just outside Jenin to house those whose homes were destroyed during the April invasions. It was all set up, and no one moved in. They said they would rather live in the rubble of their homes than move into tents again. The tents sit empty.

Elsewhere in the zone of total destruction, there is graffiti painted on the walls. “Sharon you can’t kill our conviction”; “Give me liberty or give me death”; and the message in this picture. “We will stay here.” 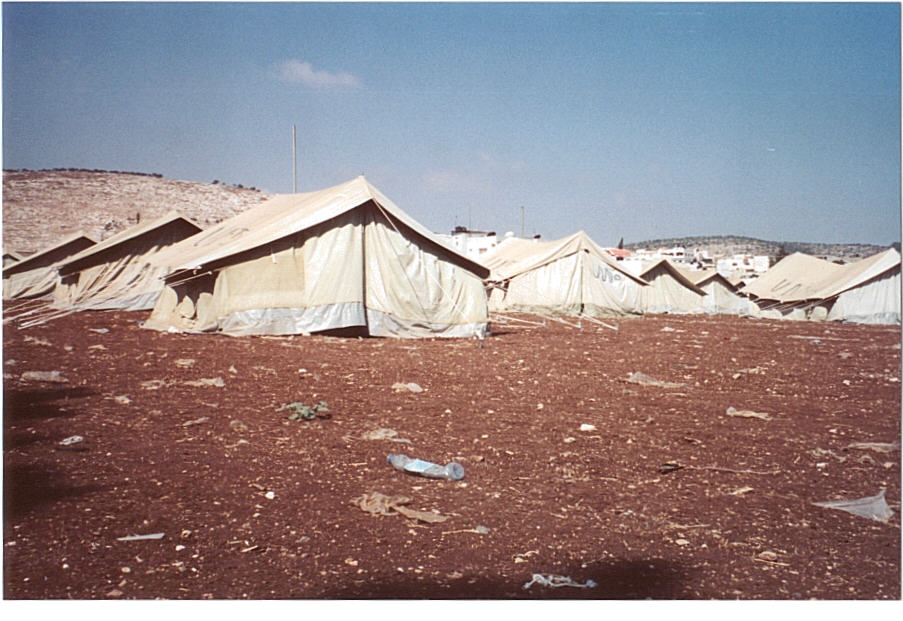 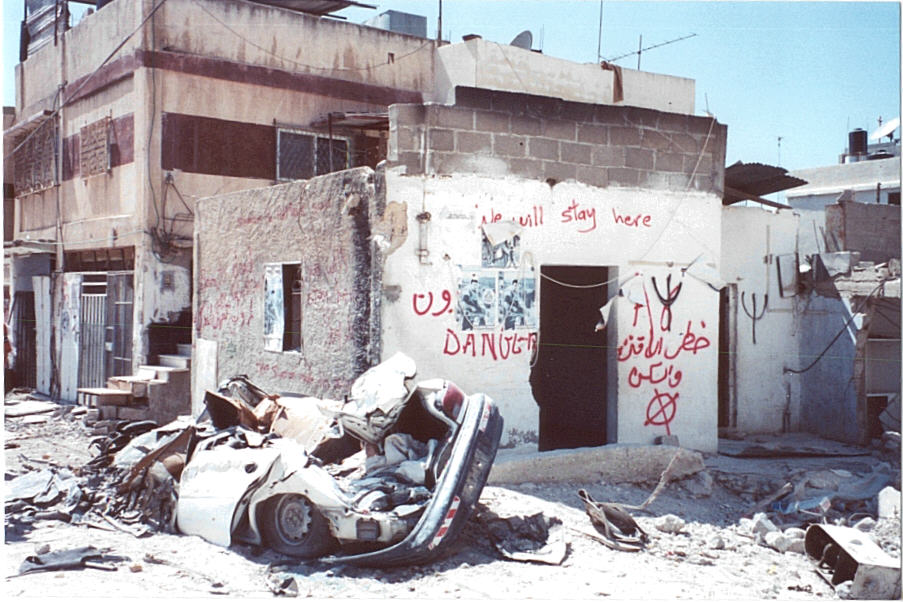 Tell me about Gaza.

END_OF_DOCUMENT_TOKEN_TO_BE_REPLACED

This is a society that’s slowly being choked to death. It is marked by fear, random violence, and irrational destruction. No one is allowed peace of mind. Even the relatively well-off — those with jobs and some money — live in constant fear. The poor, of course, are the hardest hit.